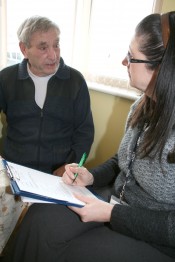 Residents in an area of east Hull are being asked by researchers to give their latest verdict on housing, the environment, community safety and fear of crime in their neighbourhood.

Staff from EMS Ltd is, a newly-formed charity which specialises in neighbourhood management, are taking to the streets of the Southcoates East Ward around the Preston Road area. The team will be going door to door for more in-depth conversations with residents to find out about their concerns and hear about any initiatives which are improving their quality of life.

It is the fifth annual survey of the 250 households. Previous issues which have been raised and addressed include the increased visibility of police and community safety staff, cycle patrols, dog fouling and fly-tipping. EMS Chief Executive Jan Boyd says: “This survey aims to provide a clear picture as to what residents as customers feel about the area as a whole and the services that affect them such refuse and recycling collections, grass-cutting, housing maintenance and policing. The results will show any hotspots in the area and then the organisations we work with, along with residents, will look at ways of tackling these issues and how to ensure they do not happen again in the future.” The findings will be considered by the Southcoates East Neighbourhood Management Panel, which is supported by public sector partners such as Hull City Council, Humberside Police and Humberside Fire & Rescue Service. The results will also be published online at the EMS website, www.emsyorkshire.co.uk, in April 2010. Jan adds: ”We’ll feed back to residents by letter, telephone call or visit, letting them know of any actions that have occurred as a result of their responses. We’re unusual in our doorstep approach but if residents don’t have the time, they can return their completed questionnaire to us by post.”